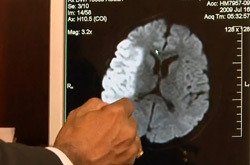 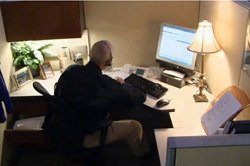 Allan back at work shortly after major stroke 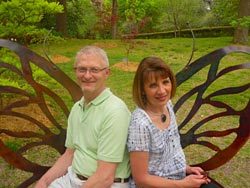 Alan and his Wife, Debbie

Alan and Debbie Moore determined early in their relationship that good communication is important for the development of a strong and healthy marriage. With that in mind, the Moores prioritized studying and discussing the Scriptures together, and put special emphasis on being of the same mind and expectation of the goodness of God.
(See photo above, Alan and his wife studying the Holy Bible)

The Moores were introduced to Andrew’s teaching four years ago when he visited their church in Decatur, Texas. After their introduction, the Moores spent many hours studying Andrew’s teachings called Christian Survival Kit and Harnessing Your Emotions.


Although neither knew it at the time, those teachings planted the seeds for a miracle they would see manifest in their lives.

On July 15, 2009, Alan and Debbie returned home after working their ten-hour shifts at Kenneth Copeland Ministries, where they both serve as prayer ministers. Although it was a steamy 104 degrees outdoors, Alan felt it would be okay if he did some yard work. Not long after Alan went outside, Debbie felt prompted by the Holy Spirit to go outside as well. She exited the house only to find Alan on the ground at the end of their driveway. Debbie spoke to him, but Alan didn’t respond, and his eyes were fluttering rapidly. She raised her voice and shouted, “You are not going to leave me!”

Alan was air lifted to the hospital
in Fort Worth, Texas.

Debbie began speaking the Word over him, and praying in the spirit as she ran to call 911. Alan was quickly transported to Harris Methodist Hospital in Fort Worth, Texas, where it was determined that he had suffered a major stroke in his right cerebral hemisphere.

“Because of the many hours Alan and I listened to Andrew’s teaching on Harnessing Your Emotions and Christian Survival, I found it was really not a struggle to keep my emotions in check. I was amazed at the change that had taken place from the way I used to handle problems. I was so peaceful,” Debbie recalls.

As Debbie sat in the waiting room of the Intensive Care Unit that first night, she made the decision to agree with Romans 8:6, “For to be carnally minded is death, but to be spiritually minded is life and peace.” Debbie set her mind on the Spirit and never looked back.

The next morning Debbie called her sister, Denise, in Pennsylvania to let her know what was going on, and she offered to come to Texas to be with Debbie. Upon arriving at the hospital, Denise asked Debbie what the doctors were saying, but Debbie refused to repeat their diagnosis.
(See photo above of Alan Moore Brain-Alan’s MRI image shows his severely damaged brain tissue.)

“I told her I did not know, because it was not the report I was focusing on. My report was 1 Peter 2:24, by the stripes of Jesus Alan was already healed and made whole,” Debbie said.

Doctors continued to deliver the grim news of their observations to Debbie, sharing that Alan was paralyzed on the left side of his body, he could not swallow or speak, and that he had lost his peripheral vision. However Debbie was not shaken. In fact, Alan’s neurologist, Dr. Chunduri was worried that she wasn’t taking him seriously. “She didn’t flinch—she didn’t seem to understand,” he said.

The nurses and doctors were surprised over the next few days as Alan began to show rapid improvement. Two days after the stroke, Alan’s left arm spontaneously flew up over his head. The medical staff kindly reminded Debbie that the left side of his body was paralyzed. “Not anymore!” Debbie said.

Three days after having the stroke, a nurse came to test Alan’s vision. She asked him to follow a small light, using only his eyes. To her surprise, he was able to follow the light perfectly, even in his peripheral. Alan’s speech also began to improve and became clearer and clearer as Debbie and her sister forced him to read, aloud, the cards he was receiving.

On day four, after his many visitors had left his room, Alan decided he needed to use the restroom. Taking no notice of the tubes connected to him, he simply got out of bed. As his feeding tube, catheter, intravenous tubes and heart monitor fell off, warning bells began to sound and nurses rushed into the room. They wanted to know how Alan had gotten to the bathroom. “I walked here,” Alan explained. Quite taken aback, the nurses felt obligated to inform Alan that he couldn’t walk— this was news to Alan.

On Friday, July 24, just nine days after Alan suffered a major stoke, he was discharged from the stroke center. On August 1, he returned to his job. Although his supervisor, Sam Galloway, didn’t want him to work his full ten-hour shift, Alan was determined to walk out his healing. He has been working full-time since his return.
(See photo above,shortly after massive stroke,
Alan back at work as a prayer minister
for Kenneth Copeland Ministries.)

Dr. Chunduri was so confounded by Alan’s recovery that he wanted to perform another MRI (Magnetic Resonance Imaging) and another MRA (Magnetic Resonance Angiography) to be sure his initial diagnosis had been correct. The second set of tests revealed that indeed Alan had suffered a major stroke, and this further solidified that Alan is a walking miracle. To this day Dr. Chunduri doesn’t understand Alan’s recovery. “He made a miraculous recovery, and I can’t explain that,” Dr. Chunduri said.

Join in and write your own page! It's easy to do. How? Simply click here to return to Healing Testimonies-Tell Us Your Miracle Healing Story!. 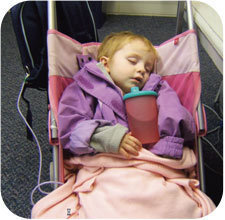